A new sprint filled with opportunity

We're very happy about our new project member Johan Hillebjörk who will help us with our graphic profile and finding our tone of voice. Also, we've found Trello for working with an electronic Kanban board. Looks very useful now that we are more participating members.

And we have a plan for our upcoming sprint. I have a very positive feeling about this one and think it will be a productive one.

Cheers and thanks for reading!
Elias
Posted by Elias at 27.3.14 No comments:

This day we have dug our teeth into exploring alternative routes that Loomio opened up yesterday. We have gotten a first contact with them and are now contacts in Sweden for translation of their tool into Swedish and Elias has started to set up a virtual environment to see if/how we can have that as an alternative. From this point we can see how we can find synergy with Loomio. In parallel Anders continue building the platform and we head for sprint demo on Wednesday.
Posted by Johan at 25.3.14 No comments:


Last thursday we had a whole day workshop/meeting with Citizen Hive at Black Pearl here in Lund. Very interesting and promising. I hope they get up to speed quickly so we can join forces. They are a great initiative and very talented, no doubt they will be a future partner for us. A Hive in this case means that they are both a Hub, a Cluster, an NGO, a Meeting Place and have a chosen governance in system (Sociocracy). Interesting, right?

Also interesting is the tool Loomio, a very similiar project from New Zealand. They have already reached over 1500 organizations. Impressive! There's definitely something there...

I spent last week implementing comments to individual posts, running into a lot more trouble than expected, which turned out to be at least partly because of a typo I didn't think to check for. From this week forward, I'm paying more attention to such "trivial" details - lesson well learned!

Actually, this paying attention to things I tended to overlook before, is becoming something of a theme this week, hence this my first contribution to the blog (which I completely forgot in my quest for comments-functionality last week).

Today I started a new morning-routine, which I hope will help keep up my energy-levels, as well as my ability to focus, namely waking up an hour earlier, walking down to the ocean and just float around on my back for about 30 minutes before going back and turning on the computer. Not only does this help me relax and  deal with any internal issues I might have on my mind, but its also the best way to deal with the heat, which can be an issue here sometimes.

next I guess I should rethink my current diet, 2 pots of coffee/day cant be healthy, and I'm while I have been trying to provide myself with healthy snacks to keep my mouth busy when coding, I'm sure I could eat better.

So a lot of routine-related changes for me this week. But what about coding?

For now, the goal is to have a robust and safe login-feature in place as soon as possible. In the future, we would also like logins to be welcoming and user-friendly. Keeping this in mind, this morning we decided to use the library PassportJS, which will enable us to allow users to log in using Google/Facebook/Twitter etc. There are other libraries that offer the same functionality, we ended up choosing PassportJS largely due to the completeness of its documentation.

But security is a notoriously complicated aspect of the web, and even using a complete solution such as PassportJS, I'd say me and Elias are in for quite a bit of tutorials and head-scratching over the next few days.
Posted by Anders Martini at 21.3.14 No comments:

Yesterday I finally gave up trying to install mongoose-auth/bcrypt/node-gyp on my 64-bit Windows 7.
What a relief! I struggled with that for quite a while, and my fallback plan - to set up a Virtual Box image with Ubuntu - was easier than expected. After that everything worked flawlessly. Besides solving my problem with bcrypt, future developers in this project will benefit from having a machine with a preinstalled environment ready for immediate development. 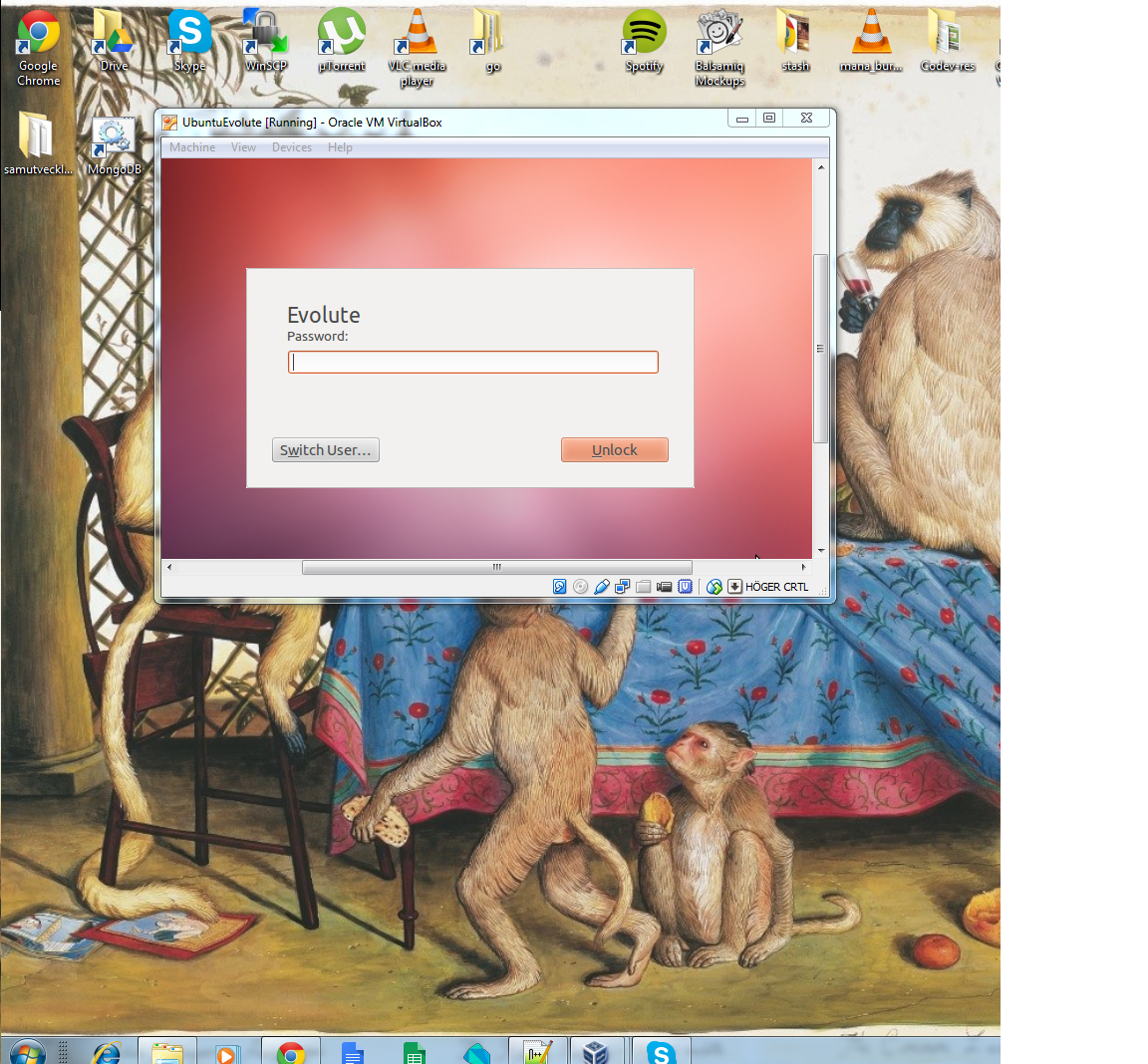 I also had a very pleasant and stimulating lunch at Raw Food House in Malmö with my friend Johan Hillebjörk.  We're looking forward to future co-operation around the graphical profile of our platform! It's really a great opportunity for us to benefit from his expertise.

Today we had a Skype meeting with Jonas, a candidate for local elections and an IS member, to see how he could understand the potential and possibilities with the platform. To our delight he got the core ideas quickly and already started to see applications and new ideas forming. This bodes well...

Last Friday Emil went to Denmark to meet with Alternativet, the newly formed political party with a manifest close to the IS manifest. Daniel and Emil has been meeting with the core team a few times now and part of the purpose this Friday was to present the platform and see how we can deepen the co-operation. More info to come...

Meanwhile we are sprinting on...

Demo and a new sprint

We've held our second demo on wednesday evening. Emil, Morten, Johan, Anders and I participated. Unfortunately Daniel was sick and couldn't join. We presented the user interface mockup along with the actual system that me and Anders have been developing. We also discussed, among other things, new interface ideas, open source distribution and our current situation. The meeting was good and shows that we're on the right track but there's still a lot of possibilities to explore! 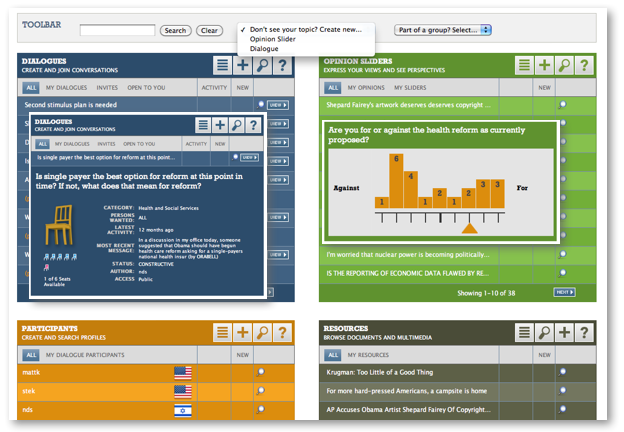 On thursday we had a friendly and informative online meeting with one of the creators of Mediem. Noam, a really nice guy, showed us how their tool had been used in an inter-faith program for an american university and pointed out some important functions for better and more engaging conversations.

We've started the new sprint and hope to add user login functionality and a visual mind-map overview functionality to our platform during the upcoming week.

The theme of the day has been connecting and reaching out:

Me and Anders have finally built a base that is good enough to expand. A lot of learning and troubleshooting but we're starting to see some results. We are setting up the most important views to be able to present something that can be accessed and tested out on the demo on wednesday.
A very interesting new kind of forum is taking shape!

I'm learning a lot about front-end frameworks and tools. Today we integrated Stylus. Next up is Bootstrap and Nib.

In about two weeks we are planning on having the first round of trials with users within the IS project. It will be a minimal functionality available and the mock-up/UX demo will hopefully help to get a feel for what the potential/possibility of a more complete system will be.

We are eager to get engaged participants to feed back their ideas and experiences. One team in Stockholm and one here in Skåne. Some key questions to seek answers to will be:
What will the reactions be...? :)
Posted by Johan at 5.3.14 No comments:

This is a late post for yesterday. Me and Anders started to dig into some important considerations for the platform. We decided to go with a familiar express-mongoose project setup to get some momentum. We decided on CoffeeKup as a template renderer. Furthermore we'll the mongoose-auth framework for authorization of users. This will enable us to quickly integrate login with facebook, google, twitter etc.


In the evening I also attended the Node Meetup Malmö at Foocafe to dig deeper into the possibilities with npm. It turns out that npm is extremely nifty tool to super easy get hold of and set up new node modules. After the presentation I hanged out with my friend Johan Erlandsson  who gave me some seriously good advice on responsive design. Also nice to meet Oskar, a colleague from Cybercom which I hadn't encountered before. It was all very nice, we decided we should attend the next Node meetup in April.
Posted by Elias at 5.3.14 No comments:

This day we have a longer work day - adding two hours today and a few more days adjusting for J being out-of-office end of the week. It is also a good test to see what happens if we experiment with the daily frame in comparison with the weekly frame.

Daniel came by for a quick visit seeding ideas for how we can solve prolonged engagement beyond the first 2 months and also feeding back from the LiFT meeting in Trondheim where IS was represented by 8 members.

We are integrating Anders more and more in the work and had a Skype meeting in the afternoon.  He had been out of internet for the whole weekend - a black out in the whole neighborhood... It worked fine during first half of our call, but crashed for the last part when J and A were going to work on learning goals. New try tomorrow afternoon.